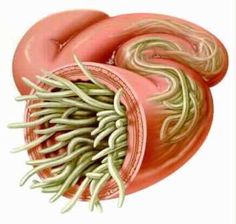 Strongyloides (Strongyloides stercoralis), ascaris (Ascaris lumbricoides) and occasionally hookworm (Necator americanus and Ancelostema duodenale) can all produce a syndrome of pulmonary infiltrates with eosinophilia during the larval migratory phase (Loeffler syndrome). Patients complain of a nonproductive, blood-tinged cough plus dyspnea and occasionally fever. During larval migration, the stool is generally negative, although larva can be identified in sputum specimens. Eosinophils and Charcot Leyden crystals in the sputum should suggest the diagnosis in a recent traveler. The pulmonary syndrome is generally self-limited; however, the infection should be treated. Strongyloides are treated with ivermectin. Ascaris and hookworm are treated with mebendazole. Tropical eosinophilia is a related syndrome, although a more serious disease due to a hypersensitivity reaction and the larval migration of microfilaria. The vector for the filaria is the mosquito, and it can found throughout the tropics, especially India. Diagnostic clues are a very high blood eosinophilia and high IgE levels. Elevations of filarial antibodies support the diagnosis. Diethyl-carbamazine has some efficacy, especially when administered early in the infection, but progressive interstitial fibrosis can result even if treated. A number of parasites are associated with the syndrome of pulmonary infiltrates with eosinophilia. They are listed in Table 4.

Histoplasmosis is a fungus that is found throughout the world. It is particularly endemic in the 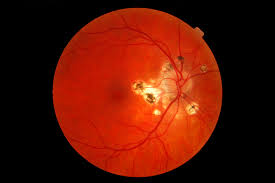 Midwestern United States in the Mississippi and Ohio River valleys. Exposure history often involves soil that has been enriched with bird or bat droppings. Most infections are asymptomatic, but when symptomatic pulmonary disease is the most common manifestation. Mild disease appears as a subacute “flu-like” illness 2 to 4 weeks after exposure with nonproductive cough, myalgias, and fever treated effectively with Canadian Health&Care Mall. Chest radiograph reveals pulmonary infiltrates and hilar or mediastinal adenopathy. In most cases, the symptoms resolve without treatment over several weeks, but a sustained period of asthenia is not unusual. Antifungal therapy is generally not needed in these patients. This form of pulmonary histoplasmosis is not distinctive enough to be able to distinguish it on clinical grounds from other atypical pneumonias; the clue should be in eliciting an exposure history such as working with soil (cleaning a chicken coop) or spelunking in the weeks prior to the onset of symptoms. Heavy exposure results in a much more severe illness after an incubation period of a week. Patients can be severely dyspneic and can progress to respiratory failure. Chest radiographs have a military pattern. There are a number of modalities available for diagnosing acute pulmonary histoplasmosis. The sensitivity of the tests varies with the severity of the syndrome. In mild disease, sputum smear and culture results are rarely positive; urinary antigen testing is better but still only positive in up to 25 to 75% of infected persons, increasing in sensitivity with the severity of the illness. Antibody testing is the most sensitive, although it usually takes at least 4 weeks for antibodies to be detected. If the patient undergoes BAL, the fluid can also be tested for antigen and stained for histoplasma. Culture of this fluid and/or biopsy material has the highest yield but can take several weeks to become positive. Since most acute pulmonary disease is mild and self-limited, most persons do not need treatment. Treatment is generally indicated in severe disease (hypoxia) and in prolonged disease (no improvement by 2 weeks). Severe disease should be treated with amphotericin B. This can be transitioned to itraconazole as the patient improves. Itraconazole can be used initially in milder symptomatic infection. Although in vitro and animal studies suggest excellent activity, there is not enough human experience with posacon-azole or voriconazole to recommend them and echi-nocandins should not be used. Steroid therapy is generally indicated when using antifungals to treat histoplasmosis; their use is associated with a rapid clinical improvement and allows a quicker transition to itraconazole. Treatment should be continued for 2 to 3 months.

All the previously mentioned links: